Aldrik Voldus became the Third Brotherhood's third Grand Master in a single year after Valdar Aurikon was killed by the Daemon Primarch Magnus[2] and Doriam Narathem fell in battle with the Lord of Change M'kachen on only his fourth mission in command. The combined power of Narathem's sacrifice and Voldus' psychic assault acted as a beacon that guided Supreme Grand Master Draigo from the Warp. After they defeated M'kachen together, Draigo named Voldus the new Grand Master of the Third Brotherhood. Voldus swore an oath to live up to this honour.[3a]

When the Thirteenth Black Crusade began, Voldus came to the defense of the Realm of Ultramar, when it was invaded by Abaddon the Despoiler's Chaos hordes, and served as a trusted adviser to the resurrected Ultramarines Primarch Roboute Guilliman[1]. Voldus was able to make it to Ultramar in time thanks to a prediction by his Prognosticars.[4] Months later, when the Ultramarines and their allies had regained the upper hand, Guilliman announced he would leave the rest of the invasion's forces for Marneus Calgar to defeat and intended to travel to Terra, in order to better aid the Imperium. The Primarch then asked for the Grand Master's aid to help him reach his Father's side and Voldus agreed. The Grand Master and his Brotherhood, joined the army of forces Guilliman took with him on his perilous journey[3b] and Voldus was one of the few who successfully reached Terra.[3c]

Voldus subsequently took part in the Indomitus Crusade, leading his Grey Knights alongside the Custodes under Trajann Valoris in the Battle of Gathalamor.[5]

In battle, Voldus wields the mighty Nemesis Daemon Hammer Malleus Argyrum.[1] He is said to be the most powerful Psyker the Grey Knights have seen in centuries.[4a] 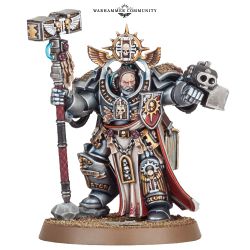