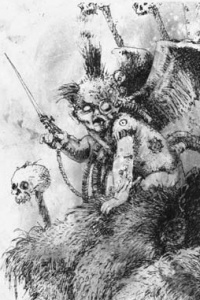 The Cherubim (sg. cherub, pl. cherubim or cherubs) are a unique form of construct created by the Adeptus Mechanicus for the Imperium. In appearance they are small angelic children, with the intentional effect of symbolizing purity. Although cherubim are specially-built for many purposes, some psychic Inquisitors utilize them as familiars.[Needs Citation]

Vat-grown and enhanced with bionics and anti-grav technology they often swoop and chatter about the sepulchers and cathedrals of the Ecclesiarchy and act as sycophants to priests, cardinals and Inquisitors across the Imperium, babbling fanatical rhetorics in their high-pitched, querulous voices.[5]

The origins of these artificial constructs are unknown though they first entered Imperial records 2,000 years after the Horus Heresy. Particularly the first mention of their existence was during commemoration pageant of the Emperor's ascendance to the Golden Throne. The Adeptus Mechanicus Technomagi created a cherub for every year the Emperor had been watching over Mankind from the Golden Throne. Since then, the Adeptus Mechanicus continues to maintain a host of Cherubim.[6]

Over the centuries, they had served the Imperium on many great occasions. However, they also have a darker involvement in history as noted in the Age of Apostasy when Goge Vandire, the Master of the Administratum, took power. A master manipulator, though psychotically paranoid, Vandire used the awe generated by the appearance of the Cherubim to legitimize his regime as approved by the Emperor. He ensured that thralls of the constructs which symbolized innocence surrounded him during all public events and portrait sittings to further maintain control over the masses. While serving as a manipulation tool, a more subvert task was these Cherubim being equipped with spy-ware programs to watch over potential spies and dissidents among the Palace. Because of this, for centuries after his bloody reign they were sometimes known as "Eyes of Vandire".[6]

Regardless, the true origins and creation of the Cherubim remain unknown.[6]

A Cherub was essentially a type of servitor which was shaped into small baby sized angelic being with wings. They were noted for their more independent thinking and were created through vats where they were breathed life by the tech-priests. This was a noted difficult task as various components were required to create such a being which included making a viable skeletal structure, circulatory system, internal organs and more importantly that spark that makes them intelligent. Though the more complex task was the creation of a nervous system for the resultant creature.[6]

These servitors have the most complex neural systems due to the complex mannerisms displayed by the Cherubim. The ranks of the Cherubim were not mass produced but tailor made for their masters make each unique.[6]

Sometimes cherubs are also grown in a vat from purely biological components. The technology used in this process is unknown.[6]

Unlike normal servitors, the Cherubim contain the most advanced form of behavioural programming and independent thinking amongst the mechanical creations of the Mechanicus. Yet, like most Familiars, to remain functional they must be controlled through a Mind Impulse Unit in order to direct them. Without this link, they become frightened and helpless. But once attuned to its master, the Cherubim will undertake any task even if it results in its own certain destruction. Despite this, there exists a deep link between the Cherub and its master with information such as sights and feelings being exchanged between the two. As such, the destruction of the Cherub can be a painful feeling for its master. Furthermore, their masters often become quite attached to them and go to great lengths to prevent their deaths.[6]

These servitors are not purely functional in nature as their small chubby appearances are not suited for combat, maintenance, labour or any other such tasks. Their role was determined by the adept involved in their creation. Purposefully built as symbols of purity, they also serve as a form of decoration.[6]

Though not suited for combat roles, there are other more subtle tasks that a Cherub can be suited for such as spying, bearing weapons or equipment, being sycophants to their master and singing devotional hymns. Others possess integrated power generators allowing them to protect their master with an energy shield or anti-psychic equipment of use against psykers.[6]