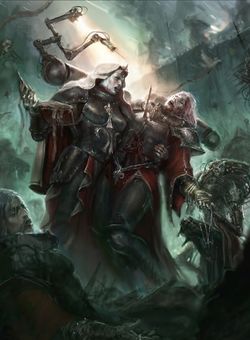 A Sisters Hospitaller tended to the wounded[12c]

The Orders Hospitaller[Note 1] are non-militant orders of the Adepta Sororitas.

The Orders Hospitaller dates back to the time of the Great Crusade and Horus Heresy, but during this time it included men.[9] The Orders Hospitaller provide surgeons, physicians and nurses to areas which require them, including both military operations and civilian areas.[1] The members of this order have been called on by the Inquisition for support in battle with both healing and, more rarely, torture.[2] They can be found accompanying many branches of the Imperium, from Imperial Guard Regiments to the personal armies to Inquisitors. They are often deployed to warzones where new and grotesque weapons are being brought to bear against Imperial forces.[12a] They carry specialist equipment to aid her on the front lines, a clutch of anointed Chirurgeon's tools moves with her as she wields bone saws and hypo-awls that can also be turned upon the enemy. If all else fails, they deliver a killing blow with their Bolt Pistols.[12c]

A Sisters Hospitaller trains heavily aboard their sanatoria barges and among the Hive-slum hospices and pioneer missions on the Imperium's fringes. Years of painstaking study of millennia-old texts are carried out in the halls of their Order's sanctuaries. Individual Hospitallers spend their lifetimes researching the abilities and ailments of the enemy. Over countless battles they become inured to the grim realities of war and develop and intimate understanding of the terrible mathematics of survival. If a soul can not be saved, a Sisters Hospitaller will grant the injured the Emperor's mercy, ushering a prayer before swiftly ending their life. But if the victim's spirit has been corrupted, a Hospitaller offers no such beneficence, ending their tant without ceremony or hesitation. To carry out this role, they administer deadly toxins in place of their course course of stimms and painkillers.[12c]

The sanctuaries of the Orders Hospitaller contain massive libraries detailing the most esoteric tools of death the Imperium has encountered, accompanied by journals of Sisters who have spent their lives researching how best to heal their devastating effects. Some Orders operate alongside the Ordo Sepulturum in studying weaponized plagues, whereas others work to develop protections against psychic assault. They have also been known to work in close conjunction with the Orders Famulous, mapping bloodlines and genealogy in order to stem the spread of mutation. They also dedicate themselves to understanding the physiology of their enemies, tirelessly studying Xenos biology.[12a]

The Orders Hospitaller is overseen by the Chirurgeon-General[9] and is divided into two main bodies: