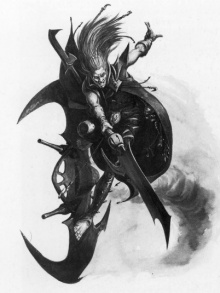 Once a noble in the Kabal of the Slashed Eye, Sathonyx was punished for bringing an Eldar Farseer into court, a fine prize but too dangerous for even the Kabal, and was accused of putting the entire house in jeopardy. Banished by Archon Cythrax, Lord of the Slashed Eye, he was captured and cast into the bowels of Commorragh. Sathonyx slew his captors and fled. From that day on, a substantial reward has been on Sathonyx's head. However, no bounty hunter or alien bloodhound could track him. Not even the elite Kabalite Trueborn could catch him. Gathering to him an army of the exiles, dispossessed, and rebels, Sathonyx launched a year-long campaign that brought the house of Cythrax to its knees.[1]

To this day, not even his most senior lieutenants know his darkest secret: his coat is lined with the bones of the Farseer that began his downfall, and by scattering them in blood Sathonyx can see dimly into the future, allowing him to be forever one step ahead of his foes.[1]