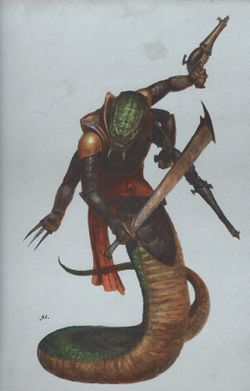 Sslyth are an alien species that inhabit the galaxy as mercenaries and are typically seen within an Archon's Lord's Retinue.[1]

Millennia ago, the race fell before the temptations of unbridled excess and quickly became one of the most favored beings by the Dark Eldar. Their serpentine bodies along with two sets of limbs allow them to carry enough blades along with weapons to quickly dispatch anyone foolish to harm their master. Their scales are hard enough to serve as armor while seemingly being impervious to pain. This along with their skills made them fearsome warrior fiends in combat which is why they are often chosen as a bodyguard detail for an Archon. This is because Dark Eldar make poor bodyguards due to their treacherous nature which is why Sslyth are often recruited from the ranks of the aliens that inhabit the Dark City of Commorragh in order to protect their master from an inevitable coup.[1] While savage in appearance, they in fact possess a great intelligence.[2]

The best way to deal with Sslyth is to take advantage of their poor tolerance for cold. Upon exposure to cold temperatures they will fall into a death-like coma.[2]

Sslyth are also known to have fought as part of the xenos mercenaries of the Alpha Legion's Sons of the Hydra in their campaign to eradicate the Ultramarines' Successor Chapters guarding the rimward edge of the Maelstrom in late M41.[3a] They took part in the successful ground assault against the Marines Mordant's Fortress-Monastery the Bas-Silica on Vitrea Mundi.[3a] Here they fought alongside the Tarellians, Morralians, Galgs, Fra'al, and Eldar Outcasts, and were united with them by a shared seething hatred of humanity.[3a] The use of different species was chosen to provide maximum strategic flexibility, and their extremely varied combat styles made them very difficult for even the Marines' Veterans to defend against.[3a][3b]

Sslyth in the service of a Dark Eldar Archon

In Sons of the Hydra, Quetzel Carthach was said to have included xenos in his close circle of advisors.[3a] While Omizhar Vohk is the only confirmed advisor, Sslyth or members of the other xenos mercenaries Carthach used may have been included among them.