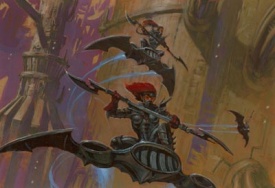 Hellions form gangs that prey in the streets of Commorragh. They often maintain close ties to the Wych Cults, who provide them with various Combat Drugs and protection against other gangs and threats in exchange for performance in the bloody fights of the Cult's arena, as well as any realspace raids they may be hired out on.[4]