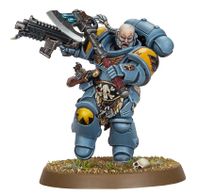 Battle Leader is a specialized rank used by the Space Wolves.[1]

Essentially the Space Wolves equivalent of a Space Marine Lieutenant, two Battle Leaders exist in each Great Company of the Space Wolves and act as battlefield commanders whose authority is surpassed only by their Wolf Lord and the Great Wolf himself. These gifted warriors are chosen by their presiding Wolf Lord, usually from the ranks of the Wolf Guard. Often, the two Battle Leaders in a Great Company will have complementary natures – a fiery, passionate warrior may be teamed with a cool, calculating tactician. Upon gaining this honour, some Wolf Guard Battle Leaders adopt new equipment better suited to their position as the alpha of several packs. Some even take a Thunderwolf as a mount, particularly those in the Deathwolves. In recent times Battle Leaders have also been drawn from packs of Primaris Space Marines.[1]