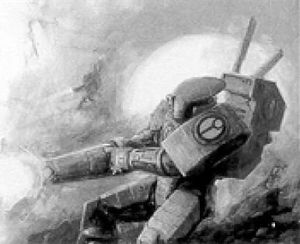 The XV15 Stealth Battlesuit is a type of Battlesuit used by the Tau.[1]

The XV15 is amongst the smallest Battlesuit ever used by the Tau - indeed the XV15 is hardly larger than a Fire Warrior in his typical armour - but that only enhances its role as infiltrator and saboteur.[1] XV15 teams specialize in ambushing isolated enemy troops and intervening in support of friendly units, operating with a great deal of independence and along broad parameters as opposed to specific strategic objectives.[2b] As with other battlesuits the XV15 incorporates multi-spectrum sensors and recoil absorption technology, but in addition it is also equipped with a jetpack and stealth field generator, a holographic disruption field making the suit harder to spot. The suit increases the user's strength, allowing them to hit harder in close combat and carry a burst cannon into battle.[2a]

The XV15 is an older Stealth suit design, and has since been supplanted by the Third Sphere-era XV25 as the most common model. However the XV15 is still in widespread use due to its intermediate role between infantry and battlesuit.[4] 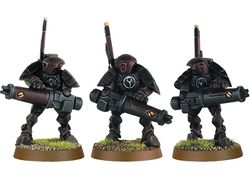