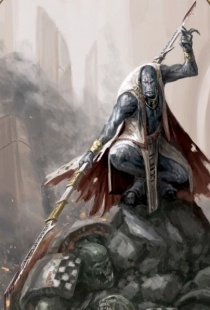 A modest Tau hero of many battles, Aun'shi longs for peace but is bound by duty to his comrades to wage war. Lionized by the Fire Caste, he is seen as a good luck charm by those who have served with him.[1]

Aun'shi is more comfortable in the company of Fire Warriors than many members of the Ethereal Caste and will frequently accompany a squad into battle as Shas'aun'shi. He may select any Fire Warrior team to act as his retinue. Such a team is clearly marked for glory.[1]

In what was supposed to be his final assignment before retirement, he was sent to the planet of Kel'tyr, to oversee a mining colony dealing with Feral Ork tribes.[1]

During the inspection of the town of Fio'vash, they came under attack by one such tribe of Orks, intent upon capturing the mine workings there. When the Shas'vre in charge of the Fire Warrior garrison was killed, Aun'shi dispatched a messenger and a Stealthsuit Team to the capital for help and in the meantime led the defence himself, slaughtering Orks by the dozen, armed with only his Honour Blade.[1]

As dusk fell, Aun'shi and less than fifty Fire Warriors remained to protect the town. The Tau fell back to a barricaded shrine in the centre of the town, where they prepared to make their final stand. Aun'shi stood at the door to the shrine and stood his ground, not moving even when the doors themselves were ripped from their frames. Suddenly, the Ork forces were thrown into disarray as Tau reinforcements attacked: Devilfish troop carriers, Hammerhead Gunships and Broadside Battlesuits quickly devastating the Ork mobs and scattering the survivors. Aun'shi still stood at the shrine's door, his Honour Blade slick with Ork blood. The Ethereal shrine still stood and the mines of Fio'vash remained in Tau hands.[1]

His defense of Fio'vash was considered a great victory, despite the horrendous casualties suffered by the Tau. When word reached the Ethereals on T'au, it was decreed that Aun'shi would continue to serve the Greater Good and further expand the Tau Empire. Aun'shi is considered to be a hero by the Fire Caste, and a huge marble bust of him was erected in the battledomes of Vior'la.[1]

Presently, Aun'Shi is reported to be leading an expedition to the Farsight Enclaves.[Needs Citation] 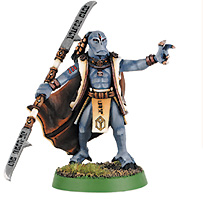