Order of the Bloody Rose

The Order of the Bloody Rose is one of the six major Orders Militant of the Adepta Sororitas[Needs Citation]. 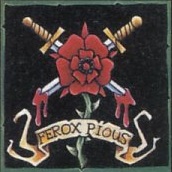 The Order is based on Ophelia VII within the Convent Sanctorum[1] and was founded along with the Order of the Sacred Rose by Ecclesiarch Deacis VI[2a] in honour of Sister Mina mid-M38[3a]. Their colours are blood red power armour and black cloaks with white linings. Their weapons are the same black as their cloaks.[2b]

The Order is well known as executioners and for their conviction to bring a swift end to their enemies similar to their patron saint. Consequently, Dominion Squads of the Bloody Rose are of particular renown, where their mission and the Order's convictions coalesce to make for ferocious assaults by these squads.[7]

From the moment a Sisters joins the Order, she is taught to foster and harness her most violent impulses. Litanies of heretical deeds are burned into the minds of recruits, filling them with hatred. Prayers that would be whispered in silence by other Orders are bellowed loudly by the Bloody Rose. In place of meditation, they learn to enrage themselves even when they are not faced with provocation. They are however also trained to focus their anger, for they are taught that to allow oneself to be overtaken by rage is as great a sin as notions of mercy.[15]

On the battlefield the Bloody Rose advances with disciplined maneuvers, using weight of fire to gain an advantage over a fank or employing feints to draw their enemy into overcomitting. As soon as the foe is in range, they charge into their lines and engage in a bloody melee fueled by rage and hate.[15]

Though the Order is committed a significant portion of its forces to war zones along the Great Rift, the majority of its forces are battling in the galactic south. These include Hive Fleets Leviathan and Hydra as well as harrowing battles against the Thousand Sons Cult of Duplicity.[15]