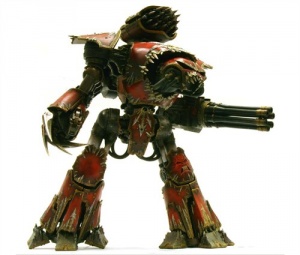 A Chaos Reaver Titan by Forgeworld[2]

Nearly all of the Chaos Reavers in service are left over from Titan Legions of the Dark Mechanicum which sided with Warmaster Horus during the Horus Heresy and are thus increasingly rare. As is the case with most Chaos Titans, its Machine Spirit is wholly corrupted by the powers of Chaos and the Titan's soul and crew, now possessed by daemons, are doomed to serve the Chaos Gods in battle for all eternity.[1a]

A medium-class Titan, Chaos Reavers are armed with heavier weapons then their Feral Scout Titan counterparts but are still not as heavily armed as a Warlord or Emperor Titan. They may carry up to two primary weapons and one secondary weapon.[1c]