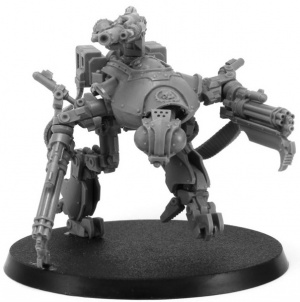 The Vorax Class Battle-Automata is a type of war robot used by the Legio Cybernetica of the Adeptus Mechanicus.

These hunter-killer designs were created from the ancient and revered Crusader template which dates back to the Dark Age of Technology.[1]

Created on pre-Imperial Mars to search and destroy Mutants and rogue machines, their cybernetica cortex engrams are known to be particularly predatory and vicious examples of their kind. Such are the vicious instincts inherent in their programming that they are wired with numerous override cantos to prevent these tireless hunting machines from devolving into renegades. The automata were equipped with a Lightning Gun, Power Blades, and two Rotor Cannons, making them capable of quickly decimating infantry and civilians.[1]

At times they are also dispatched by their masters to conduct a cull of surplus population during famine or plague, their hunts only ending when their masters orders. As such they are held in superstitious dread by the human indentured laborers of the Mechanicum's worlds.[1]