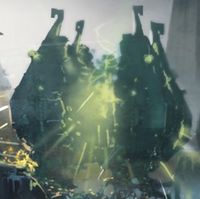 The Tesseract Vault is a large Necron war engine.

One of the ultimate weapons of destruction in the Necron arsenal, at its center is a captured Transcendent C'tan Shard. Such is the power of the C'tan trapped within that the Living Metal walls of the Tesseract Vault are constantly being destroyed. It is only through the continuous effort of the Vault's Canoptek Leeches that the walls are kept in place while the Canoptek Sentinel at its center controls the C'tan by enclosing it in a force shield generated by its tentacles and drawing from the Star God's own energy.[1][2] The power of an activated Tesseract Vault is such that it can age foes to dust, set acres ablaze, or trigger earthquakes.[3]

Even with a measure of their being given over to their own containment, Transcendent Shards are foes almost beyond parallel. Unlike the lesser shards, they are keenly aware of the might and glory that once lay at their command, and with that knowledge comes unbridled power and malevolence. The C’tan of old were much given to whimsical displays of destruction, and a Transcendent Shard’s only solace in capture is bringing suffering and death wherever it may. [4]

In times of desperation, Necrons will sometimes free the Transcendent C'tan from its prison, allowing it to rampage throughout the battlefield. However in this state, it is as dangerous to the Necrons as it is the enemy.[2]