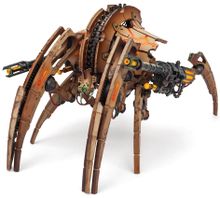 At the heart of many Necron tomb complexes, sleeping Seraptek Heavy Constructs await the footfall of intruders. These brutal war engines were designed by ancient Cryptek conclaves to protect each world’s master program, and this they do with merciless efficiency. Generators thrumming, the huge constructs advance with frightening speed, their optic lenses glowing as they pick out their targets. Massive cannons swivel in gimbal housings, crackling with destructive energies before unleashing pinpoint salvos to annihilate the interlopers. Should foes stray too close, the tomb guardians lash out with impaling forelimbs, their energy-sheathed tips rending metal, flesh and bone alike at a molecular level.[1]

As the legions of the Necron dynasties march out into the stars in ever-greater numbers, many Necron Overlords have summoned their Seraptek constructs to join their ranks, replacing their timeless vigils with front-line battlefield duties. In this capacity, Seraptek Heavy Constructs have proven mighty engines of conquest, more than capable of meeting an Imperial Knight or Ork Stompa head-on and emerging victorious.[1]

In combat, the Seraptek is armed with either Synaptic Obliterators, Transdimensional Projectors, or a Singularity Generator.[1]