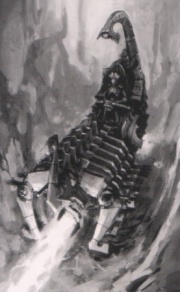 Similar in appearance to the Ghost Ark transport, it sacrifices troop carrying capacity in favor of a single devastating Doomsday Cannon. It is not a tank in the conventional sense, but rather is essentially just a self-propelled doomsday cannon. Despite its fragile appearance[2] these vehicles can make the weapons of the Imperium seem primitive. Even fired at low power the doomsday cannon is ferociously destructive, while at full power it eclipses conventional plasma weapons in power many times over and only a Titan could hope to withstand its firepower.[1] 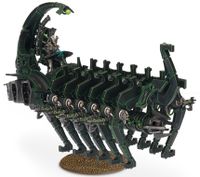