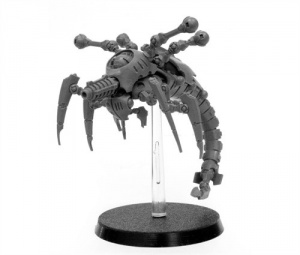 Canoptek Acanthrites are flying Necron insect-like constructs. They are murderous machines armed with a tail-based hyper-phased Voidblade and a high-powered Thermal Cutting Beam. Canoptek Acanthrites are often encountered in the vanguard of Necron attacks and extermination campaigns against lesser races, and their numbers vary from army to army. They are capable of stripping a city down to rubble and slaughtering its inhabitants in a merciless tide of destruction.[1]