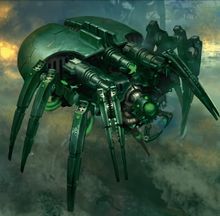 Canotepk Spyders are used to watch over and maintain Necron Tomb Worlds. Unlike their Necron masters, Tomb Spyders never sleep, rather they spend the aeons servicing the structures of their tomb worlds. Though it is essentially just an automated drone, a Tomb Spyder is still a formidable foe and is armed with hives of Scarabs in addition to self-repair backup systems. Tomb Spyders are also capable of directing Wraiths against any who intrude into a Necron Tomb. However the most dreaded aspect of Tomb Spyders is their ability to quickly repair other Necron Warriors on the field of battle.[1]

Though not sentient by any means, these machines have complex and layered subroutines that can adapt to most situations. If a trio of constructs are acting in concert, one will take command and harness the processing capability of the other two to create a gestalt supermind far greater than the sum of its parts. This hyper-efficiency is passed on to all Canoptek Wraiths and Scarabs in the vicinity, allowing for Spyders to affect a coordinated and precise response to any threat.[4]

Spyders are equipped with an array of weapons, such as Fabricator Claw Arrays and twin-linked Particle Beamer.[3] They also possess a Gloom Prism and the ability to rapidly manufacture swarms of diminutive drone-like constructs in vast, shimmering clouds.[3]