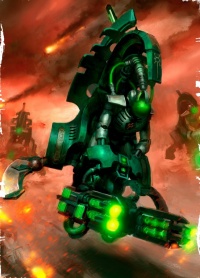 Originally a space fighter in the final days of the War in Heaven, the Necrons' robotic bodies meant that traditional pressure-sealed and canopied craft were unnecessary. So successful did the craft prove that modified versions soon appeared in planet-side battles. The craft are capable of aerial maneuvers controlled by hyper-fractal equations that organic pilots could not perform without succumbing to blackouts and nausea.[1]

The Tomb Blade has a curious motion for a craft of its design, eschewing the arrow-straight vectors of other Jetbikes in favor of dimensional repulsor engines that ensures gravity and friction has little effect on its frame. As a result, the craft often corkscrew across the battlefield rather than taking a more direct approach, constantly changing vectors and altitude to interfere with enemy aim. No pilot of flesh and blood could ever hope to withstand this style of flight. However their flight patterns are pre-programmed by hyper-fractal equations, as a standard Necron Warrior would make a dreadful pilot.[3]

Tomb Blades often operate far ahead of the main army, striking at lightly-defended positions with their twin-linked Tesla Carbines, Particle Beamer or Gauss Blasters.[1] For support equipment, they utilize Shadowlooms and Nebuloscopes. 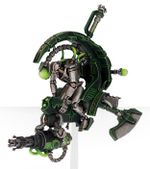