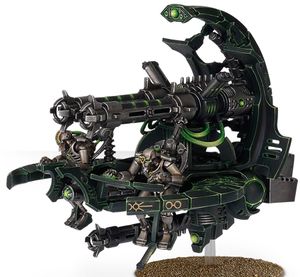 Primarily used as anti-infantry vehicles, Annihilation Barges are armed with twin-linked Tesla Destructors - enormous energy cannons that fire devastating arcs of lightning. The tesla destructor is primarily an anti-personnel weapon, though it still effective against all but the heaviest armoured vehicles. The Annihilation Barge is similar in design to the Catacomb Command Barge but foregoes carrying capacity in favor of heavy firepower.[1]

Annihilation Barges are seldom swift enough to keep pace with Necron advances, and so they are often deployed as defenses for strategic locations. Additionally, most Necron Overlords task a squad of Immortals as guards. Such partnership proves deadly to enemy assaults.[2]

Nowhere are these Barges more commonly employed than by the northern Akannazad Dynasty, where they prove vital against Ork assaults.