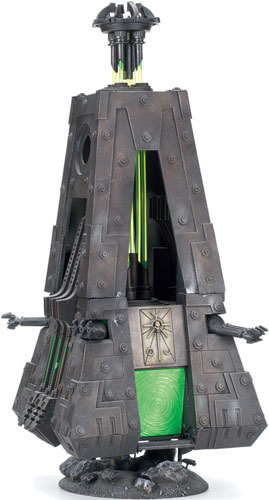 An example of a Doomsday Monolith model

A Doomsday Monolith is a super heavy device deployed by the Necrons as part of a Doomsday Phalanx, and is the Necron approximation of a super-heavy battle tank.[1]

A Doomsday Monolith is found at the centre of a Doomsday Phalanx, and is a heavily modified Necron Monolith protected by an unknown design of energy field. It is capable of focusing awesome destructive energies, and is more powerful than a regular Monolith.[1]

It otherwise functions in the same way as a regular Monolith, and is capable of using its portal to deploy Necron Warriors from reserve or from other parts of the battlefield.[1]

A Doomsday Phalanx consists of at least three regular Necron Monoliths, with the Doomsday Monolith at its core. The first sighting of a Phalanx was during the Damnos Incident.[1]

A Doomsday Monolith possesses a power matrix nearly identical to that of a normal Monolith, with one difference. Instead of firing a Particle Whip, or translocating a Necron unit, the power matrix energy can be discharged in the form of a Gauss Obliterator, a stronger form of the Particle Whip which affects a larger area.[1]

Instead of firing a particle whip, or teleporting a unit, nearby Monoliths can grant the energy from their Power Matrix to the Doomsday Monolith, which is capable of focusing this power to increase the intensity of its Gauss Obliterator.[1]