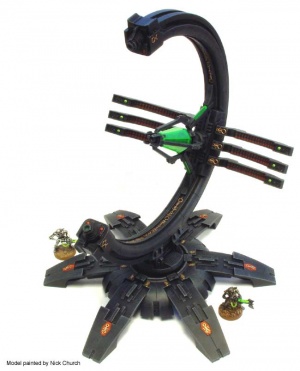 A Necron Pylon and two Warriors used for scale[1]

The Necron Pylon is a super heavy device used by the Necrons as a mobile weapons emplacement.

Necron Pylons were first encountered on WDY-272, where they emerged from the sands of this uncharted world and opened fire without prior provocation. Their location was logged by the Imperium for subsequent aerial bombardment, but when the strike was made the Pylons seemed to have vanished without a trace.[2]

The Necron Pylon in the 41st Millennium

A Necron Pylon is a crescent shaped Necron "defense turret" constructed from the same living metal as the Necron Monolith.[2] Unlike traditional turrets, a Pylon's position is not fixed and Necron attacks are often supported by Pylons that are teleported to the surface of the besieged world. When used in a defensive manner, Pylons emerge from the ground to attack trespassers and subsequently vanish to escape retaliation. Pylons have a large range of fire thanks to their ability to rapidly traverse the firing element of their primary weapon system, making them a threat to both land-based targets and aircraft alike.[2]

In the campaign for Medusa IV the objective of the Necron force was to construct a series of pylons across the planet to protect against the encroaching warp storm, as most Necron and C'tan technology (such as Blanks) seems based on combating warp-related technology and beings.[Needs Citation]

A Necron Pylon has a power matrix similar to that of a Monolith, from which the Pylon draws energy prior to discharging it in one of two forms: as a Particle Accelerator attack, or a Gauss Flux Arc.[2]

A Particle Accelerator acts as a larger version of the Monolith's Particle Whip, and is the result of the Pylon focusing the energy from the power matrix into a single bolt, which is fired towards the intended target, causing major damage within a limited blast area.[2] The Gauss Flux Arc is more diffuse, coruscating discharge of a lower strength than that of the Particle Accelerator, and is thus capable of affecting multiple units at once (indeed, a Gauss Flux Arc affects every enemy unit in range).[2]

It has also been suggested that a Pylon may be able to utilise energy via "other methods" but these abilities remain unknown at this time.[2] 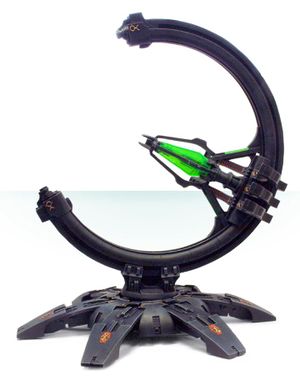 There is little difference in appearance between a regular Pylon and a Gauss Pylon, with the main difference being a variation in armament between the two.

In place of the regular Pylon's unnamed weapon; the Gauss Pylon is equipped with a formidable Gauss Annihilator, which is capable of firing a Focussed Beam (similar to the Particle Accelerator attack, however stronger) or projecting a Gauss Flux Arc. The Gauss Annihilator is also capable of rapid traverse, and when working in conjunction with the Gauss Pylon's impressive target lock and guidance systems, becomes a real threat to both aircraft and ground troops.[3]

Gauss Pylons are deployed in a similar manner to regular Pylons, either teleported into position from above, or raised from below.[3]