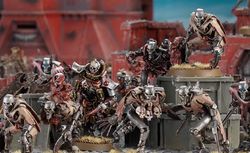 Court of the Flayer King[2]

Flayer Kings are Necron Lords who have suffered less from the ravages of the curse of the Flayer Virus, a curse sent in retribution by a C'tan known as Llandu'gor the Flayer, with their personalities largely intact. The Flayed Ones, as debased and feral creatures, will gravitiate towards the mightiest of their kind. When in proximity with one another, the gore-hungry madness of the Flayed Ones reaches new heights.[1]

Sahtah the Enfleshed is one such Flayer King who led a court of Flayed Ones to battle during the Damnos Incident at the behest of the Royal Courts of Damnos.[1]

Another Necron Lord, Valgûl the Fallen Lord, is known to have kept his sanity as he rules the Flayed One-infested Bone Kingdom of Drazak.[2]