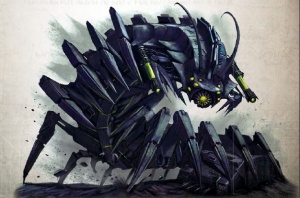 The Tomb Stalker is a huge construct used by the Necron race.[1]

These large machines were previously an unseen form of construct used by the Necrons and shaped after huge, un-living ancient beasts of prey. They are noted for being swift, tireless and relentless engines of destruction that have the single-minded task of protecting the ancient sepulchres of Necron Lords. As such, they serve a similar function as other constructs by guarding their masters' sleep whilst being eternally vigilant for any signs of intruders that would dare interrupt their lords' slumber.[1]

The arcane machinery within a Tomb Stalker allows it to detect the pulse of life through hundreds of meters of solid rock allowing it to track its prey with ease. This, combined with a type of phase field, allow it to tunnel through solid matter as if it were swimming through water and strike at targets without warning. As such, there is often little left of their an enemy, beyond dust and blood, in the wake of a Tomb Stalker's attack.[1]

A Tomb Stalker is armed with a devastating mixture of Gauss weaponry as well as razor-edged talons, giving a Necron army a powerful mixture of firepower and combat agility.[1] 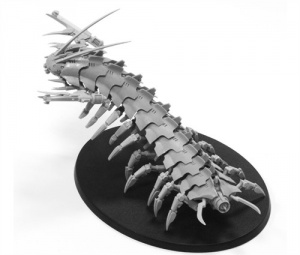