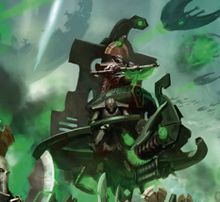 The more aggressive Necron Overlords oversee the battlefield from a Catacomb Command Barge. In ancient times, this craft would hover high above the army so that all Necrontyr could see their Overlord's presence and take heart from it. However with the mechanical Necrons, they no longer have the capacity of needing such emotions. In the modern era, the Catacomb is a a giant carrier-wave generator that allows an Overlord to instanteously issue commands to nearby troops. At the start of a battle the Overlord will often seek a raised vantage point, so he might better divine the enemy's intended strategy. Actually operating the barge is beneath the Necron nobility, and piloting the craft is left to two slaved Necron crew hard-wired into their stations. However service aboard a Command Barge is considered a great honor.[3]

While embarked upon a Command Barge, a Necron Overlord is able to oversee the battle, ensuring that his troops are engaged with appropriate targets and that everything is going to plan. The Command Barge is capable of instantly delivering orders to Necron forces.[3] The Command Barge can also act as a combat vehicle if the Overlord so wishes, its hard-wired pilots able to fly him into the midst of the action, where a Necron Lord can launch daring attacks on unsuspecting enemy units with his warscythe.[1] Service aboard a Command Barge is considered a great honor, though it also carries great risk as these pilots are often the targets for retribution by their angry lords.[3]

Similar in appearance to the Annihilation Barge, the Catacomb Command Barge favors carrying capacity over firepower, though it is armed with a Tesla Cannon.[2] 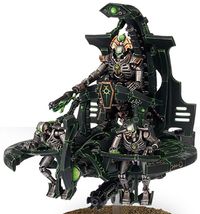