Immortals are the shock troops of the Necron army.

In the time before bioconversion, they were the soldiers of the Necrontyr civilization: battle-hardened veterans who were born anew into tireless, metal bodies. While their forms lack much in the way of the strength and complexity of their superiors, the Immortals were given bodies that were better-constructed and armored than their smaller, Necron Warrior brethren,[1c] and were equipped with superior weapons. Furthermore, Immortals have retained the ability to talk, albeit in a flat, emotionless tone: all the better to issue orders to Warriors, relay reports to their superiors. They rarely speak in other situations, remaining silent when faced with concepts beyond their understanding.[1a] However, there has been at least one documented case of an Immortal verbally sparring with an opponent on the battlefield.[2]

They are veritable giants, towering over even a Space Marine[2] and have retained much of their skill and expertise from their previous lives. If anything, bioconversion has allowed them to prosecute war with an even-greater amount of efficiency. Unlike the Necron Warrior, who will fall back on defensive protocols should it be without orders, an Immortal will strive for victory using every tactic and strategy at its disposal, if left to its own devices. An Immortal is incapable of adapting to new modes of warfare, but war has, even with technological advancements, remained the same across the eons, and an Immortal is seldom baffled in this manner.[1a]

Where an Immortal is found wanting in terms of tactical flexibility, it more than makes up for it in the quality of its armour. Immortals are capable of wading through storms of heavy bolter or assault cannon fire with nothing to show for it but fresh carbon scoring on their metallic forms. Furthermore, an Immortal’s self-repair systems are slightly superior to a Warrior’s, allowing them to present a still-more persistent threat to the enemy. The enemy will not-so-easily withstand an Immortal’s return fire, as their Gauss Blasters are capable of punching through most armor with ease and flaying the flesh from the bones of the soldiers inside. An Immortal’s weight of fire only increases as it closes in on a target, and it will methodically chip away an enemy’s cover until there is nowhere to hide, and every nook and cranny is scoured.[1a]

Necron Immortals are armed either with Gauss Blasters or Tesla Carbines, and usually take to the field in units of 5-10 Immortals.[1b] 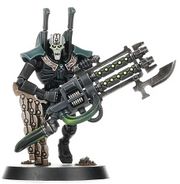