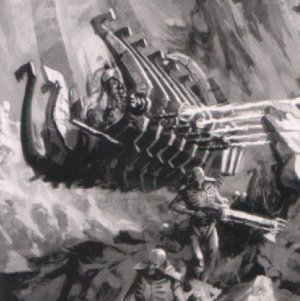 Ghost Arks are anti-gravitational vehicles which serve as the standard troop transport of the Necrons.

Similar in design to the Doomsday Ark, it sacrifices heavy firepower in favor of the ability to carry up to ten Necron infantry, though it is armed with two Gauss Flayer arrays.[2] In addition to their troop carrying capacity, Ghost Arks also act as mobile repair stations and can even fix Necron warriors too damaged to repair themselves. Thus only by destroying the Ghost Ark can a foe have any hope of victory.[1]

Ghost Arks can be traced back to the time of the Necrontyr, where they evolved over time into their current incarnation and purpose. Back in the earliest days of Necrontyr civilization, Ghost Arks took the form of wooden carriages, drawn by beasts of burden, to take away the dead to their final resting place. By the time of biotransference, the Ghost Arks had evolved into motorized vehicles. They were pressed into service no longer to round up the dead, but the living, to drag them to the great machines that would transform the mortal Necrontyr into the mechanical Necrons. The first wave of Ghost Arks were piloted by the grim-faced soldiers, but soon, they were replaced by the first of the Necrons.[2] The helmsmen of Ghost Arks are lesser and degraded Necron Lords.[3]

While the nobility of the Necrontyr society had willingly pledged themselves to the C'tan, the civilians of their society were not so willing to abandon their mortal lives. They resisted biotransference, and so the nobles sent agents to force the unwilling into the Ghost Arks to be carried away: all that was needed was a flicker of life and memory, and so they assaulted the unwilling before throwing their broken, barely-living bodies onto the wagons to be converted. Tales of these beatings spread fear throughout the civilian populace of the Necrontyr, and the Ghost Arks' reputation grew ever darker. Those who saw the Ghost Arks traveling through the streets claimed to see the victims' spirits flying thickly around the wagons, filling the air with their mournful voices. The mere sight of a Ghost Ark eventually became enough to drive those who could still feel emotion into terror.[2]

The Ghost Arks are now anti-gravitational vehicles that serve in battle. They no longer carry the unwilling, living Necrontyr in their great cities, but redeem the fallen Necrons in war. The remains of Necron Warriors too damaged to reanimate themselves are collected by Ghost Arks, trawling along the battlefield, whereupon they are attended by swarms of reconstructor scarabs. The Necron Warriors are either repaired or, if damaged too far for even the Ghost Arks to mend, broken down into raw, reusable energy. Resurrected Necron Warriors are either held in stasis to be brought back to the Tomb World, or are redeployed onto the battlefield to wage war anew.[2]