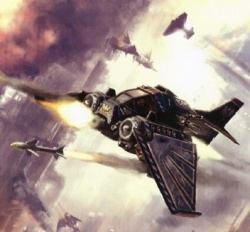 The Nephilim Jetfighter is a fighter aircraft utilized by the Dark Angels and their Successor Chapters. Employed by their Ravenwing formations, the main role of the Nephilim Jetfighter is to conduct interceptor or air superiority missions over the battlefield, clearing the skies to allow their brethren on the ground to operate without fear of enemy air attacks. Of a robust and sturdy design, they are most commonly armed with twin-linked Heavy Bolters, twin-linked Lascannons, and six Blacksword Missiles.[1] Some are also equipped with Avenger Mega Bolters.[2]

The Nephilim Jetfighter has only been used by the Unforgiven since M40, when the STC for improved jet engines was discovered by the Dark Angels while hunting a suspected Fallen known as Baelor the Imposter in the Nephilim Sector. Designated the Lionheart Engine, the technology was used to modify older aircraft designs and the end product was an angile fighter with improved speed. The Nephilim has proven itself on innumerable occasions, perhaps most notably during the Piscina IV campaign, when a trio of Nephilim Jetfighters were able to shoot down four dozen Ork aircraft. By keeping the skies clear of foes, they allowed the Dark Angels and local PDF to hold out against the Greenskin advance.[2]

Since then, the Nephilim has been a common sight in Unforgiven hands. In 146.M41 the Ravenwing formation was tasked with special reconnaissance missions during a massive tank battle between the Imperial Guard and Eldar on Kundra. After pressing deep into Eldar territory, the Dark Angels found themselves beset on all sides by the xenos' Grav-tanks. However with the aid of Nephilim jetfighters, the Ravenwing was able to clear the skies of the flying tanks and Jetbikes and win the day.[2]