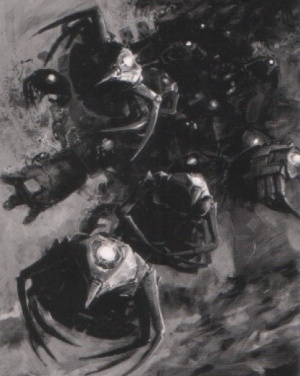 Canoptek Scarabs[5] are small constructs used by the Necrons, to break down organic and non-organic matter.[1a]

Essentially mindless feeding machines, these constructs mind Tomb Worlds and perform a variety of other tasks[1a]. In battle they fly ahead of the main army in swarms so thick that they've been known to blot out the sun. They appear out of nowhere, deadly, but making no sound except for the rustle of carapace over carapace. While Scarab swarms have no direct weapons, their claws are sufficiently sharp to slice through an enemy's armour. Because of their size they can find cover easily, but when in swarm they are vulnerable to massed ordnance. They may be armed with Disruption Fields for attacking heavily armoured targets.[1a]

Scarabs are capable of breaking down essentially any material into energy. They use this to reproduce at an astonishing rate, creating never-ending swarms that devour all in their path.[4]

Flensing Scarabs are swarms of specifically designed Scarabs designed to swiftly and violently separate flesh from bone. Although no more than mere insects in size, in large groups they can nonetheless reduce organisms down to bone with terrifying speed.[2]

A smaller variant of standard Scarabs, Mindshackle Scarabs are the Necrons' chief method of controlling alien races. At the bearer's command, they burrow into the victims brains and turn them into little more than a puppet for the scarab's master.[1b]

These tiny Scarabs are used by Imotekh the Stormlord to draw Flayed Ones to a target.[7]

These nano-scarabs are used to heal Necron structures and units. They are commonly employed from Canoptek Reanimators.[7b]