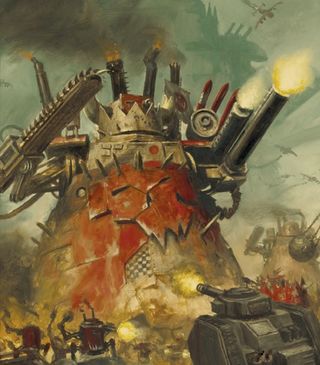 A Stompa is a small type of Gargant, usually mounted with various anti-infantry, anti-vehicle or sometimes anti-titan weaponry.[1]

Stompas are enormous walking fortresses clad in layers of scrap-iron armor and bristling with enormous amounts of firepower. They live up to their name by stomping across the battlefield and annihilating everything in their path. Every one of these vehicles is a unique creation, the product of several Mekboyz fevered brains and countless hours of Grot slave labor. However as they approach their state of completion, all Stompas begin to share a few similarities. First of these is their fat-bellied and belligerent appearance made as effigies to the Ork Gods Gork and Mork. Secondly, they are usually powered by massive internal boilers and furnances that link to a forest of smokestacks and vents. Thirdly, one arm is a hydraulic affair the size of a docking crane and ends in a monstrous Chainsaw known as a Mega-Choppa. The other arm usually consists of a mass of artillery, the largest of which is a Deffkannon. All Stompas also sport a belly-mounted Supa-Gatler.[8]

As they lumber towards the battlefield, Stompas carry Orks aboard their cramped transport decks. Once inside enemy lines, they disgorge these passengers to wreak havoc before stomping towards the biggest enemy they can see and annihilating it.[8]

Sometimes, Warbosses will put aside their differences and join their Stompas into Stompa Mobs [1], highly effective en masse. In the case of the Third War for Armageddon, thousands of these were brought to Armageddon, making them a common sight on the battlefield.[Needs Citation]

The regular Stompa (if such a thing exists) can feature many weapons and upgrades, including[4]: 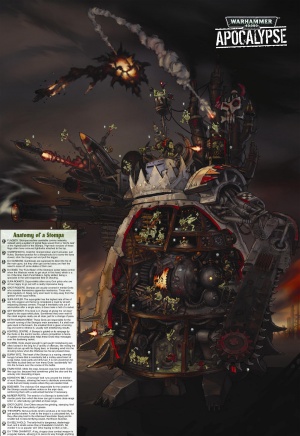 Sometimes a Big Mek gets so influential and powerful, they decide building themselves a walking battle fortress bristling with large and unreliable weapons is the best thing to do[1]. Unlike a regular Stompa the Big Mek's Stompa have large traktor beam units called Lifta-Droppas[1] instead of either its CC weapon or the Deth Kannon. It is usually a weapon that makes way for Lifta-Droppa, as the Big Mek replaces co-axial Supa-gatler with the more advanced Gigashoota. Finally, the Gaze of Gork/Mork gives this Stompa the incredibly powerful (and unreliable) energy weapon.[5]

Of course no budding Big Mek wants his prize Stompa getting blown to pieces, so he fits it with crackling energy fields to prevent too much damage.[Needs Citation]

Goff Klawstompas are very similar to regular Stompa's apart from they have a pair of large piston driven "Big Klaw's" instead of a Deth Kannon and a regular Titan close combat weapon.[2].They are also armed with the Flamebelcha, the extremely powerful flamethrower.[5] These are rarer Stompa variations, unless a huge Goff Waaagh! ensues, because they are built by Goff Meks, who normally build infantry-centric engines of war[3].

Goff Rokk n' Rollas are gargants that, like their Klawstompa counterparts, forgo ranged weaponry for Titan-sized close combat weapons. This time, however, the weapon of choice is a huge, spiked roller[3]. Similar to a Deffrolla, this massive roller is attached to the ends of the Gargant's arms, and is used in devastating charges against infantry, fortifications, and vehicles. These usually end in the targets flattened or bloodily pasted against the roller. This type of Stompa is even rarer than the Klawstompa due to their building facilitated by Meks in Goff employ.[Needs Citation]