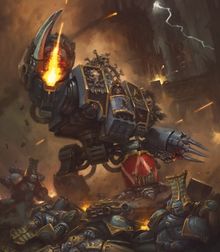 Wulfen Dreadnoughts are Dreadnoughts in the Space Wolves Chapter that have fallen to the curse of the Wulfen.[1]

Wulfen Dreadnoughts are created when the Canis Helix of an entombed Dreadnought mutates unexpectedly, creating a drastic mutation known as the Curse of the Wulfen. Sometimes the process distorts their crippled body as well as their mind, causing Iron Priests to refit the machine to better reflect its new condition. While some Dreadnoughts are mechanical and cold, Wulfen Dreadnoughts howl, twitch and spasm like a crazed animal, as their machine spirits are provoked by the Wulfen's fury. Now consumed with a singular predatory instinct, Wulfen Dreadnoughts seek only to maul and eviscerate their enemies, until the metallic beast is eventually stared down by their Wolf Lord. Because of this, their typical weaponry is replaced with close-range weapons such as Fenrisian axes and Great Wolf Claws. Some Wulfen bear a Blizzard Shield, its powerful forcefields allowing them to weather even more punishment as they plunge into battle.[1] 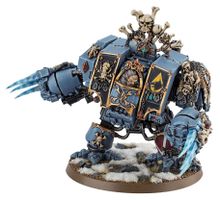