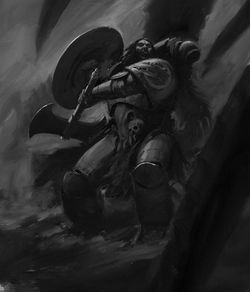 Unlike other Space Marine chapters who reinforce their squads, the Space Wolves do not reinforce their wolf packs when casualties occur and for this reason the Long Fangs and Grey Hunters operate at a reduced strength. Even the most experienced packs will sometimes suffer such a great loss that only one survivor remains from the pack. This sole survivor has no pack, no kin, no rank, nothing left in the Universe but to seek revenge for his fallen brothers.[1]

These survivors are known as Lone Wolves and will swear an oath to avenge the honour of their brethren. As the final stage of his oath nears completion, a Lone Wolf vows to hunt down and slay the fiercest foe, all in the name of his fallen wolf pack. Once the Lone Wolf has taken the oath, he then prepares himself for the ensuing battle, both mentally and physically, rejecting any company from others.[1]

On the eve of battle, it is often a sight of great awe as Lone Wolves advance on the enemy, their gaze fixed upon a single target that they will stop at nothing to slaughter. Many Lone Wolves do not fulfill their own self-prophecy and are inevitably slain in the process, being rejoined with their fallen wolf pack with a fine tale to tell. Rarely though, a Lone Wolf will return victorious in the hunt, carrying the head of the fallen enemy back to his commander in the Great Company. These unique individuals are almost certainly inducted into the Wolf Guard at the request of the Wolf Lord that they serve, for such a feat to succeed is no small accomplishment indeed.[1] 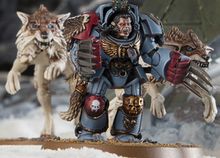