From Warhammer 40k - Lexicanum
(Redirected from Ulrik the Slayer)
Jump to: navigation, search 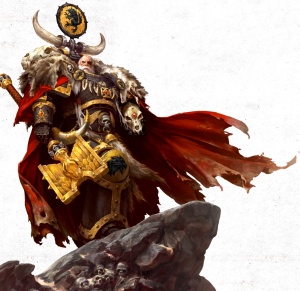 Ulrik the Slayer, also known as Grandfather Lupus and Guardian of the Sons of Russ, is Wolf High Priest of the Space Wolves[1a].

As indicated by his snow-white hair, Ulrik is the oldest Wolf alive (excluding Dreadnoughts), older even than Great Wolf Logan Grimnar, who has served the Chapter for 700 years[1a]. It was Ulrik who selected future Great Wolf Logan Grimnar for induction into the Chapter and watched him grow into the leader he is today. Ulrik still has a close bond with Grimnar and is his chief adviser, still referring to the Great Wolf by his first name and treating him like he is still a young upstart.[6]

Ulrik won renown during the First War for Armageddon, while serving as a Wolf Guard in the Great Company of Wolf Lord Kruger. When his Company stormed head-on into the attacking Chaos Space Marines of the World Eaters, Lord Kruger fell in combat with three hulking Khorne Berserkers. Though he had lost his own weapon, Ulrik leapt to defend his dying Lord, slaying the three Berserkers in a bloody melee. His battle fury was so awe-inspiring that Angron Daemon Primarch of the World Eaters felt compelled to offer a grim salute[1a][5] The day after the Imperium's victory on Armageddon, Ulrik was renamed "the Slayer" and his fellow Wolf Guards voted him as Kruger's replacement. To general astonishment, Ulrik declined, being one of the few, if not the only, Wolves to refuse such a promotion. At heart, Ulrik believed he was a warrior, not a leader[1a]

In the aftermath of the war, the human defenders of Armageddon were declared tainted by the Administratum and the Inquisition, and rounded up, en masse, sterilized, and relocated to slave labour camps. Logan Grimnar was enraged by this treatment of the Wolves' allies, and it was only Ulrik's counsel that prevented this rage from exploding into open war against the Administratum[1b]. Instead of ascending to Wolf Lord, Ulrik accepted the rank of Wolf Priest, and discovered his true calling: the selection and training of new recruits to the Chapter. With years of combat experience and accrued wisdom, Ulrik is both a fine teacher and a great mentor for any aspiring Wolf[1a].

In recent years, however, Ulrik has become even more aggressive in combat, rushing headlong to meet the most deadly of enemies with no regard for his own safety[1a]. By the start of the Indomitus Crusade Ulrik was now extremely elderly and acknowledged that he was nearing the end of his life. Nonetheless he battled Orks alongside Logan Grimnar and counseled the Great Wolf against accepting the new Primaris Space Marines. He also urged Logan to meet his supposed fate at the hands of Ghazghkull, whatever it may be. However once Logan agreed to take in the new warriors, Ulrik carried out the orders without question.[7]

Like all Wolf Priests, Ulrik is equipped with a Crozius Arcanum, a Fang of Morkai, and a Wolf Amulet. He also carries a Plasma pistol. In recognition of his status, Ulrik has been gifted with the sacred Wolf Helm of Russ, fashioned by the Emperor's own artificers and given to Leman Russ at the founding of the Space Wolf Chapter. It gives Ulrik a penetrating gaze that reinforces the morale of any Wolves who catch sight of him, while striking terror into any enemies unlucky enough to do so[1a].