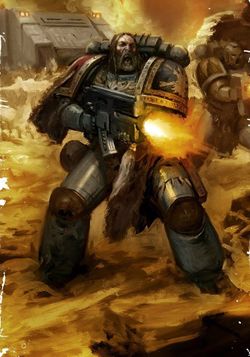 Grey Hunter is the second rank of the Space Wolves Chapter. These Space Marines make up the majority of a Space Wolf Great Company, similar to the Tactical Squads of a Codex Chapter.[1a]

After surviving their initial service as Blood Claws (a process which can take decades, or even centuries), Space Wolves are promoted to the ranks of the Grey Hunters, and allowed to trade in their bolt pistols for the venerable boltguns that are the mainstay of a Space Marine's armoury.[1a]

The Grey Hunters are as hungry for battle as their Blood Claw brethren, but their aggression is tempered with experience that has taught them the value of patience and cunning. Grey Hunters excel at both attack and defense, and moreover are able to determine which approach best fits the tactical situation at hand. When on the offensive, they exhibit the pack skills of true hunters, advancing with deliberate suppression fire and flawless coordination, until they draw close enough to the enemy to unleash their savage charge.[1a]

As a Space Wolf grows older and more experienced, the Canis Helix — the unique aspect of the Space Wolves geneseed — causes more extreme physical changes. By the time they have attained the status of Grey Hunters, their hair has literally turned grey, their fangs have lengthened, their hides have toughened, and, in some extreme cases, their eyes may turn yellow, until their resemblance to the wolves of Fenris is greater than ever.[1a]

It is usually from Grey Hunter packs that a brave, skilled warrior will be chosen to join the Wolf Guard. For this to happen is a great honour to both the individual marine and his pack. The pack may well compose a saga to commemorate the warriors deeds and relate them to future battle-brothers. These sagas both impart battle knowledge to younger marines, and inspire their courage and bravery, causing them to try to outdo their predecessor. After serving as a Grey Hunter for a time, the pack will be formed into the heavy weapon team, known as the Long Fangs.[1b]

Recently with the introduction of Primaris Space Marines Logan Grimnar has sought to combine the ancient customs of Fenris with that of the influx of new Space Marine warriors and wargear. To this end, Grey Hunters have taken up the role as Suppressor Squads.[2]

A standard Grey Hunters pack numbers 5-10 marines, armed with boltguns, close combat weapons, and frag and krak grenades. Select members of the pack may arm themselves with a meltagun, flamer or plasma gun, or specialized close combat weapons, such as a Power Weapon or even a Power Fist. In addition, one of the Grey Hunters may be entrusted with carrying the Wolf Standard.[1c]