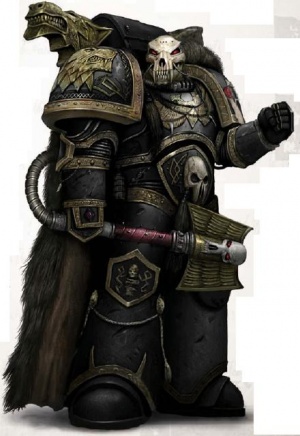 Wolf Priests combine the roles of Chaplains and Apothecaries within the Space Wolves chapter, being responsible for both the spiritual and physical well-being of their fellows.[1a]

They are selected from any part of the chapter but usually from the Long Fangs or Wolf Guard due to the greater wisdom of these marines. Instead of using Codex medical equipment, Wolf Priests use healing potions and balms, using knowledge passed down from one Wolf Priest to the next.[4]

Wolf Priests are also almost entirely responsible for the recruitment of aspirants to the chapter, selecting them from the hardy native warriors of Fenris. Commonly garbed with wolf totems, including wolf-skull shaped helmets, they can often be seen observing battles from nearby vantage points, ready to select suitable candidates for the Space Wolves from the survivors. The Priests are often the only Space Wolves these tribesmen ever see, and are regarded as god-like figures.[1a]

Of all the new Primaris Space Marine battle-brothers recently inducted into the Space Wolves, it was the Wolf Priests who encountered the greatest difficulties in gaining acceptance. At first their battle chants were not of Fenris, but of old Terra, copied from Legion manuals dating to before the Great Crusade. However, their howling zeal and dedication has won over even the most grizzled Space Wolves, and with each battle the Primaris Wolf Priests become ever more steeped in Fenrisian custom.[6]

Like conventional Space Marine Chaplains, Wolf Priest's wear all-black power armour and carry a Crozius Arcanum as a close-combat weapon. They are also equipped with Wolf Amulets, which generate protective fields similar to a Rosarius[1a]. In addition, like conventional Space Marine Apothecaries, they are tasked with retrieving the gene-seed of fallen Space Wolves, and so carry the Fang of Morkai, a specialized Reductor.[1a]