"As the mountain is Arjac, a snow-capped peak
His rage overshadows the wounded bear.
The Rockfist endures when all seems lost."
+++ from The Saga of Arjac Rockfist+++ [1b] 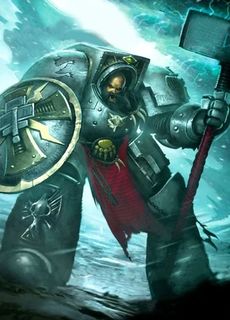 Arjac Rockfist also known as The Man-Mountain, Grimnar's Champion and Anvil of Fenris is a massive Wolf Guard of the Space Wolves Space Marines Chapter, and the personal champion of the Great Wolf Logan Grimnar himself [1a].

He speaks little, but he is not a lackwit. He knows full well that he will always be a warrior and not a leader. He is modest and unassuming in person, though he cannot deny his rare gift for crushing the mightiest of foes[1a].

Before he was inducted into the Space Wolves, Arjac was a blacksmith of the Bear Claw tribe, and was always renowned as a giant of a man, possessed of prodigious strength[1a].

After joining the Wolves, he became an Iron Priest. He keenly misses his life at the furnace and hopes one day to return to his Iron Priest brethren. Yet to anyone who witnesses one of Arjac's legendary rampages, it is obvious that his true calling lies on the battlefield, not the forge[1a].

It was a particularly hot year on the Iron Isles when one of these rampages earned Arjac his place at Grimnar's side. The shores were covered in algae, and around each volcano vegetation grew in surreal proportions - the signs of an imminent attack, but the Iron Priests were too absorbed in their work in the lava forges to notice[1a].

So when a thousand kraken-spawn surged from the ocean, the Priests found themselves sorely outnumbered. The most senior of the Priests, Hengis Blackhand, was left no choice but to order the vaults sealed against the tide of the kraken, sealing hundreds of good men outside on the volcano slopes[1a].

Arjac did not agree with his decision, but did not waste time trying to argue with his superior. He smashed his way out of the vaults with his hammer, opening an escape route for those trapped outside. All but a dozen escaped inside, choosing instead to stand with Arjac as the first wave of Kraken struck[1a]. 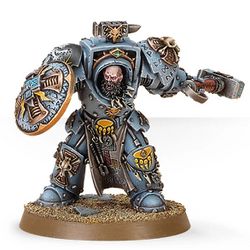 Less than two hours later, reinforcements arrived from The Fang in a hundred Thunderhawk gunships - and saw, on the ground, a lone figure surrounded by kraken and the crackling blue arcs of a Thunder hammer in full swing[1a].

When Logan Grimnar and his men reached the entrance to the vaults, Arjac's body still plugged the entrance buried under a mountain of chitin and scythed limbs. Once dug out, Arjac was immediately given to the Wolf Priests who brought him back from the threshold of Morkai's realm. Greatly impressed, the Great Wolf made him his personal champion on the spot. Since that day, Arjac has earned his spot again a dozen times over. During the Battle of the Weeping Stars, Arjac was the last to abandon the crippled Strike Cruiser Fangs of Fenris, dragging wounded brothers to the salvation pods even as the hulk burned around him. While he was protecting the Great Wolf on the crystal plains of Vhaldon IX, Arjac filled the Mirrored Gate with the corpses of Hormagaunts until the weight of the Tyranids' own dead halted their advance.[1a]

In the end of M41 during the Hunt for the Wulfen, Arjac joined Lord Grimnar in the quest for finding these mysterious and long lost warriors of Space Wolves. Defending Grimnar, Arjac fought on the planet of Vikurus with Daemons.[3] Later during the Siege of the Fenris System Arjac again fought on the Grimnar side on Fenris itself - battling in the Wolf’s Gullet region.[4] At the dawn of the Age of the Dark Imperium he fought desperately to keep Logan Grimnar alive as the Great Wolf rejected Guilliman's offer of Primaris Space Marine reinforcements and sought to meet his supposed fate at the hands Ghazghkull. However fortunately for Arjac, Logan had a change of heart on all of these issues and instead took the path of caution and acceptance.[7]

Arjac Rockfist was among those under Njal Stormcaller who ventured to Prospero to recover survivors of the Space Wolves 13th Great Company.[5]

Arjac's strength affords him the ability to wield weapons of unusual bulk and heft. The Anvil Shield is a huge Storm Shield that can be used as a bludgeon in itself — many a foe's skull has been shattered on its rune-covered surface. Foehammer is an equally oversized Thunder Hammer, which delivers devastating blows when combined with the Champion's superhuman strength. Foehammer is more than merely a potent close combat weapon, for it incorporates an ancient miniaturised teleporter keyed to Arjac's gauntlet, allowing it to be hurled at the enemy from a distance before returning to its wielder's outstretched hand in a flash of scorched atmosphere.[1a]