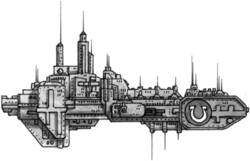 The Hunter-class destroyer is an Imperial ship design used by the Space Marines and Basilikon Astra.[2]

The Hunter Class is designed to fulfil the same role in the Space Marine Fleet that the Cobra Class Destroyer does in the Imperial Navy. Although available to all Space Marine chapters, the class is mainly used by the Dark Angels, due to their distrust of other sections of the Imperial hierarchy. The Dark Angels maintain large flotillas of Hunter class ships within their battlefleets.[1]

The Hunter class is armed similarly to the Cobra, but is a little faster, allowing it to react quickly to openings the enemy provides. The vessel is equipped with torpedo tubes and a weapons battery. The same shield and turret array complement found on the Cobra class is fitted on a Hunter class. The Hunter is also more heavily armoured than a Cobra, providing it with a little more survivability in a combat situation.[1]

A Hunter is one of the smallest vessels typically in service in a Chapter's fleet.[4b] Each Hunter is around 1km long and has a crew complement of around 10,000.[4a]