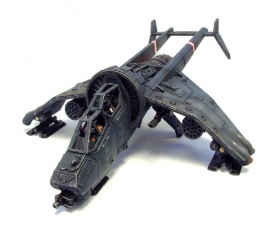 The Vulture Gunship is an attack gunship based upon the Valkyrie troop carrier, with similar hover and VTOL (Vertical Takeoff Or Landing) capabilities.

Like the Valkyrie, the Vulture is operated by the Imperial Navy and attached to Imperial Guard units, particularly Drop Regiments lacking heavy armour and artillery support. The Vulture is operated by a crew of two, a pilot to fly the craft and a weapons operator to aim and fire its armament. A single Vulture will typically fly in support of a flight of Valkyries whose variable weapon configurations allow a variety of missions to be fulfilled: anti-tank, infantry suppression or bombing enemy strong points. They often remain after the Valkyries' passengers have disembarked and the transports have retreated acting in a direct air support role, aiding the drop troops in tougher fire fights. Although they can mount extra fuel tanks to accompany Valkyries on long-range operations, this does reduce their weapons payload.[1a]

The standard armament on the Vulture is its nose-mounted Heavy Bolter, with four wing hardpoints, along with Extra Armour and a Searchlight. The two inner wing hardpoints, besides extra fuel tanks, typically mount twin-linked Multi-lasers, although these can be replaced with Lascannons, Missile Launchers, Autocannons, or Rocket pods. The two outer wing hardpoints, besides extra fuel tanks, typically mount two Hellstrike Missiles, but can also be replaced with two Hellfury Missiles,[2] two Rocket Pods, two bomb racks for a total of six Heavy Bombs or Heavy Smart Bombs, or two missile racks for a total of six Hunter-killer Missiles.[1b] For extreme firepower, the Vulture can replace all of its wing-mounted munitions for a twin-linked Punisher Gatling Cannon, while all gunships can be modified with additional upgrades.[2]