The Fire Raptor is a Space Marine attack gunship based upon the Storm Eagle design.[1]

Known to have its origins long in the Imperium's past, the Fire Raptor is configured to to maximize ammunition storage in order to feed its numerous weapons systems. This is accomplished by sacrificing the Storm Eagle's transport capacity. As a result, the Fire Raptor carries a range of formidable weapons, most notably twin Avenger Bolt Cannons. Additional armament includes waist-mounted ball turrets fitted with reaper batteries[5] capable of engaging targets independently of one another and wing-mounted Hellstrike Missiles.[1]

Like the Storm Eagle on which it is based, the Fire Raptor was once utilized by the Legiones Astartes during the era of the Great Crusade and Horus Heresy, but it has largely vanished from Imperial arsenals for the last several thousand years. However, it is now being fielded in increasing numbers as of the 41st Millennium, suggesting that some yet unidentified Adeptus Mechanicus Forge World or Space Marine Chapter Forge has come into possession of a complete Fire Raptor STC. A small number of old Fire Raptors, some dating back to the Great Crusade itself, exist in the armories of a small number of Chapters where they are treated as precious relics.[1] 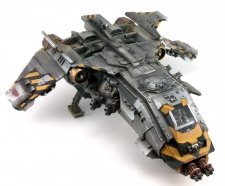 There are a lot of Chapters in M41 that have in their possession a number of old Fire Raptors preserved from the time of the Great Crusade. The Charnel Guard, for example, is in possession of a big fleet of Fire Raptors. Other chapters, like the Minotaurs and Star Phantoms, have reportedly massed 3-4 of the gunships into formations of one Fire Raptor and three Storm Eagles thus devastating a route through even the heaviest resistance of enemy troops for following Space Marine forces to attack.[4]

Chaos Space Marine warbands are also known to still employ Fire Raptors. These vehicles date back to the Great Crusade and are often Daemonically corrupted.[3]