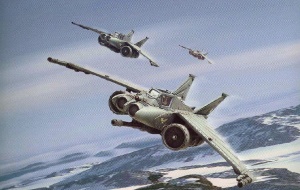 The Lightning fighter craft is mainly used by the Imperial Navy for establishing air superiority due to its increased maneuverability over the Thunderbolt. It is often seen and heard plummeting from orbit or being scrambled from naval bases.[1a]

The STC data for the Lightning was discovered during the Saint-Saen Crusade, which liberated twelve worlds in Segmentum Obscurus. They were found on Karnak II by an Adeptus Mechanicus Explorator team and the designs immediately given to the Mechanicus Lords of Cypra Mundi. It would take over five hundred years of research and trials, including readings of the Emperor's Tarot and cross-referencing with the archives of Mars, before the designs were finally approved for production in supplying fleet carriers and cruisers of Battlefleet Obscurus. Since then the designs have slowly been disseminated to the Navy worlds of Bakka and Hydraphur and Lightnings are now commonly seen alongside the Thunderbolt in both Segmentum Tempestus and Segmentum Pacificus.[1a] 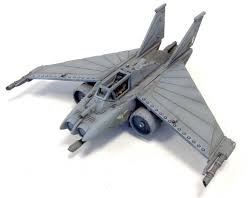 The main role of the aircraft is to engage enemy craft and establish air-superiority over a battlefield, with a secondary mission of providing air escort for Marauder Bombers. For this reason they are often based on orbiting ships or forward air bases, where their rocket booster allows them to quickly take off and engage enemy air forces.[1a] Ground-based Lightnings can also benefit from hydraulic "fast-launch" ramps which, in combination with their rocket booster engine, provides better acceleration and faster take-off time than conventional VTOL craft. Standard practice has three to four Lightnings so poised in a constant state of readiness. Although not their primary function, Lightnings may also act as a ground attack aircraft, with free license to attack targets of opportunity. This role however is better suited to the Lightning Strike.[1c]

The Lightning uses a swept-wing design and twin F100-XB afterburning turbofans to give it superior speed and better rate of climb and dive compared to the Thunderbolt, although it is lighter, less rugged and more demanding on maintenance crews. Like the Thunderbolt, it also features a rocket booster engine which allows for quick take-offs when using a "fast-launch" ramp and for limited operational capability in space, although it is not a true "starfighter" like the Fury Interceptor.[1a]

Standard armament for the Lightning is a long-barrelled, ventral-mounted Autocannon and twin-linked Lascannons on the wing tips. Four wing hardpoints allows it to carry up to four Hellstrike Missiles, Hellfury Missiles, Bombs or six Skystrike Missiles. Other standard systems includes a pair of Parallax tracking augers located in the nose section, while many will mount additional equipment.[2] 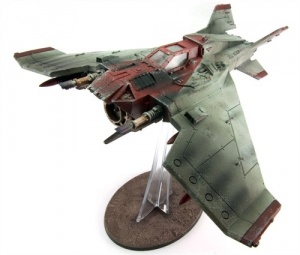 Also called the Primaris Lightning Strike Fighter, its design dates back to the Great Crusade where it was created by Archmagos-Arbiter Sykosk Thule.[4] Originating from the Forge World of Voss Prime, the 'Strike' variant of the Lightning is designed for a fighter-bomber role. It is normally equipped with a potent armament of twin-linked Lascannons and six Hellstrike Missiles or Rad Missiles.[3] The Primaris Lightning was a common type of fighter used by the Space Marine Legions during the Great Crusade and Horus Heresy.[4]

At the time of its introduction, the aircraft represented a new paradigm in aerial warfare for the Imperium of Man, being powered by a forced-plasma ramjet drive and optimized for the most sophisticated munitions available. However the pattern proved extremely costly to produce and could only be handled by the most experienced pilots.[4] 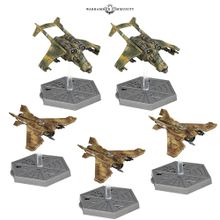