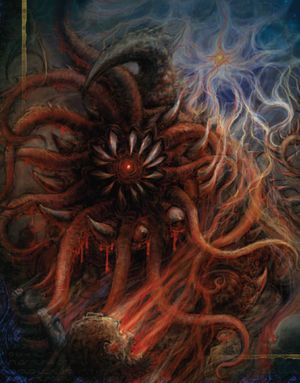 Mutalith Vortex Beasts[1] are terrifying abominations of nature which have been mutated beyond all reason by the power of Chaos and carry a vortex of the raw Daemonic energy on their backs. Because of this any servant of the Dark Gods who wishes to use these massive clawed and tentacled creatures in battle[2] risks suffering from mutation or madness.[1]

The formation of Mutalith is always an unnatural process. Sometimes dozens of Chaos Spawns on the Planet of Sorcerers are caught in an empyric eddy and blended together into Mutalith. Though such conglomerations often die, quickly owerwhelmed by the weight of mutations and energy and becoming a quivering mound of warp-infized ooze, sometimes - by the will of Tzeentch (or just by chance) - they become a monstrous abomination that is far more deadly than the sum of its weird parts: the nightmarish Mutalith. The same caprice of Tzeentch can transfrom his own Sorcerers to Mutaliths, especially when they themselves are trying to create this creature. Often an unfortunate Sorcerer is consumed by his own magic and his flesh is added to the writhing matter of his creation. Sometimes a Sorcerer becomes a Mutalith just before (and instead) of his alleged ascencion to Daemon Prince status - falling victim to the cruel whims of Tzeentch himself.[3b]

Before battle Thousand Sons Sorcerers often harness the creatures with a giant pointed star made of fire from the top of the Tower of the Cyclops. The burning Icon of Chaos that is bound within is actually a fractured shard of Magnus' eye from the crown of his tower. Through this burning portal raging Chaos winds are channeled from the Planet of Sorcerers itself, allowing the raw chaos energy of this hell-planet to seep freely onto the battlefield.[3b]

Regardless of the way of appearance the Mutalith is a horrendous opponent. The Mutalith monstrosity towers over not only over infantry but even above tanks. Its hulking body absorbs and draws in Chaos energy, acting as an empyric reservoir. This energy at once tears it body apart and holds its weird anatomy together. This constant struggle between order and entropy creates a swirling psychic tempest around the Beast that inundates all who draw near, mercilessly warping their bodies. The Thousand Sons Sorcerers revel in this field of change but everyone else suffers horribly. The thunderous roar of the Mutalith reverberates for miles and pierces the psyche of every living entity, filling it with visions of paradoxical horror. During battle few can withstand the attack of the Mutalith whose muscles grow and reknit almost constantly, tearing and crashing anything around the Beast. Massive razor claws shred tanks to pieces and the tendrils formed from warp-putrefied inner organs appearing from the creature's mouth tear infantry limb from limb or draw individuals to the monster’s mashing gullet where they are digested alive. Even close to death when the Mutalith body is torn open by enemy blades and torrents of artillery fire the Chaos power of the Beast bleeds onto the battlefield, causing even more anarchic changes in reality.[3b] 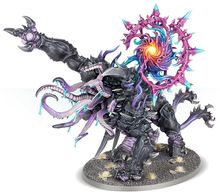