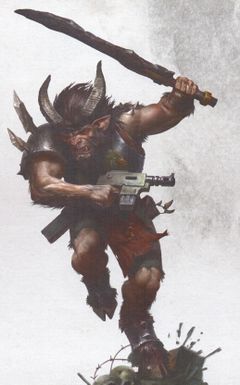 Beastmen (Homo sapiens variatus) are the most bestial and inhuman type of Abhumans.

There is also an unusually large and aggressive strain of giant Beastman known as a Minotaur. It is comparable in strength to an Ogryn.[1a]

Those Beastmen who have been introduced into the Imperial cult possess a simple but fierce devotion to the Emperor, regarding him as a vengeful god which demands tribute in the form of the blood of his enemies. They are driven by the need to atone for the sin of being mutants by fighting for the Emperor.[Needs Citation]

Within the Imperium however, Beastmen are subject to severe persecution and have been placed on the Register of Proscribed Citizens (Class A-G worlds) by the Adeptus Arbites. As such, they are effectively precluded from settlement on, or transportation to or from, more than three hundred thousand worlds of the Imperium and are forbidden from being conscripted as an Imperial Tithe obligation. These restrictions are a sure sign, that Beastmen will soon lose their Abhuman status completely and will be reclassified as true Mutants.[4]

Beastmen were initially part of First Edition Imperial Guard armies. They could later be used in Imperial Guard armies with the use of the Homo Sapiens Variatus Doctrine, and in the army list for the The Lost and the Damned (as an upgrade to ordinary mutants in the codex), though these rules are now obsolete.

Tzaangors, a form of Beastmen, reappeared in the game in the 7th Edition with the War Zone Fenris: Wrath of Magnus supplement. Standard Beastmen later appeared as Chaos units in Warhammer Quest: Blackstone Fortress.