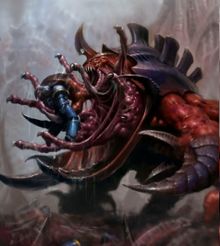 The Haruspex is a species of large Tyranid.

These monstrous creatures were created by the Hive Mind for the sole purpose of eating, and are deployed in the latter stages of a Tyranid invasion to consume biomass at a rapid rate. The most notable feature of the Haruspex is its long grasping tongue specifically designed to drag victims into its gaping maw, lined with writhing tentacles and fangs. Once within its three sets of jaws, a Haruspex will tear apart and quickly consume its prey organism. Such is the might of a Haruspex that it can devour an entire platoon of enemy soldiers in mere moments, while also dispatching tanks and fortifications with ease.[4]

It is the role of the Haruspexes to speed up the Tyranids’ process of consumption and digestion, and they go about this task with a sickening fervour. Unleashed to carry out their ravenous imperative, a host of these creatures can devour every scrap of flesh upon a battlefield in a matter of hours. When a Haruspex has gorged itself to the point where it can consume no more, it will find the nearest Tyranid digestion pool and vomit forth the contents of its stomach. Then, it will begin the process once more.[5]

The Haruspex is also equipped with four Crushing Claws and a set of chimneys that moderate the intense heat that builds up as the monster devours victims.[2][3]