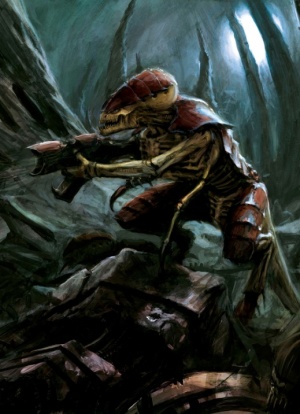 Termagants are fast, agile and cunning Tyranid creatures of the Gaunt genus. While not very strong individually, Termagants will overwhelm much more elite foes with superior numbers and support from larger Tyranid breeds.[1]

Termagants are slightly more than two metres from head to tail, and were originally created to roam the arterial passages of Bio-ships as agile bodyguards searching for intruders. They carry anti-personnel Bio-weapons in their forelimbs, commonly Fleshborers which have a symbiotic relationship with the Fleshborer beetle species. Depending on the situation, termagants are sometimes also equipped with Spike Rifles, Stranglewebs, Spinefists, or Devourers.[1]

Termagants are among the first species of Tyranid dispatched when a Hive Fleet invades a system.[2] In battle they are often seen accompanying Tyranid Warriors. In fact, there is a strange affinity between the two species. Termagants will react instinctively when a Tyranid Warrior is threatened by swamping the opponent with overwhelming numbers before the Warrior can be harmed. This reaction may be to protect the Synapse ability of Warriors and so preserve the Hive Mind's control over the Tyranid swarm.[1]

Termagants are naturally cunning and have a strong sense of self-preservation. Often they will skirt an enemy ambush and instead find a way to assail their foe from an unexpected quarter, or they will seek out and exploit enemy weak points. If cut off from the Hive Mind's influence, a Termagant's self-preservation instinct will take control and they will typically abandon the fight in search of shelter. This seeming weakness means however that Termagants remain a threat once a Tyranid assault has been defeated since every cave, ruin, or path of undergrowth that surviving defenders pass by could conceal a nest of Termagants ready to attack upon discovery. In some circumstances the Hive Mind will suppress the survival instincts of Termagants to instead send them rushing forward for the sole purpose of depleting enemy ammunition stores.[1]