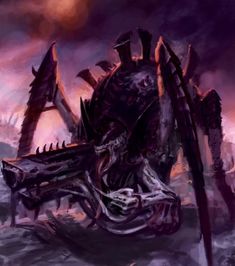 A Tyrannofex is a monstrous battle-fortress species of Tyranid. Its bulk, armour and weaponry makes it a match to, or even goes beyond, its foe's most powerful battle tanks constructed of more conventional technology.[1]

A Tyrannofex has a massive cannon fused with its torso, the largest and most destructive Tyranid weapon carried by anything smaller than a Bio-Titan. The nature of the main cannon varies between Tyrannofexes. There are three known variations[1]:

Along with its main cannon, a Tyrannofex also stocks anti-infantry weapons embedded in its carapace and breeding chambers in its thorax.[1]

However, a Tyrannofex is a bulky and ponderous target in close combat if its foes brave its formidable short-range weaponry. In response the Hive Mind has adapted Tyrannofexes with the ability to emit a stress pheromone to attract other Tyranid creatures for assistance at close quarters.[1]