"Scores of winged creatures are approaching the Hive complex. The larger ones are dropping organic missiles that burst on impact, and they seem to screech as they swoop down. The sound is becoming louder and louder. The screaming, Emperor preserve us, the screaming!"
- Vox recording recovered from Hive Cresson on Castobel.[3] 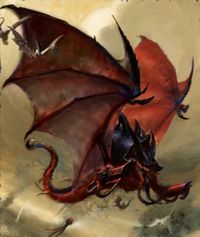 A Harpy is a large winged species of Tyranid comparable to a winged Trygon. They appear at the initial stages of Tyranid attacks working together with the similarly winged Gargoyles[1a] and other flying individuals of the Tyranid host.

A Harpy has a long and sinuous body with massive leathery wings and a broad, armoured head. To better harness thermal currents, its body is hollow, resulting in it being relatively fragile compared to Tyranid creatures of similar size. However, it has superior agility in their air than even technological fighter-craft can manage. The Harpy's undersides are covered in bloated cysts that can rain down Spore Mines onto luckless prey. It can also emit an ear-splitting shriek that might rupture eardrums and is excruciatingly painful or even fatal, and at the very least causes disorientation. It may also be given twin-linked Stranglethorn Cannons, Heavy Venom Cannons or Scything Talons, equipped according to the tactical needs of the Hive Fleet.[1b][3] Opportunistic by nature, Harpies avoid protracted assaults, preferring instead strafing runs and swooping dives, or engaging enemy skimmers ill-suited to fighting back.[1a][3] Harpies can survive the void of space, and are frequently used as Attack Craft for Tyranid Bio-Ships.[4]

Their shriek is what gave them their name and their relation to the Trygons is a highly argued topic by the Magos Biologis of the Adeptus Mechanicus.[3]

In the 3rd Edition, creatures called Tyranid Harpies were a winged Warrior variant that rained death down on unsuspecting infantry with their Devourers.[2] These creatures' current incarnation is the Tyranid Shrike.