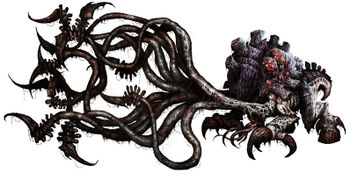 The Toxicrene is a species of Tyranid specializing in biological warfare.[1]

Physically imposing, the Toxicrene accompanies Tyranid broods into battle and uses its tentacles to thrash at those who venture too close. However its most feared weapon is the choking clouds of spores that blast out from its dorsal chimneys. Each cloud is composed of millions of tiny spore organisms that possess a predatory sentience, deliberately forcing themselves into the respiratory systems of non-Tyranid organisms. There they nestle and embed, feeding on the moisture of their host and growing an astonishing rate, causing organs to rupture, airways to close, and lungs to fill with blood.[1]

So effective is the Toxicrene’s poisonous emission that not even those wearing protective gear or clad in power armour are safe. Millions of spores seep into respirator tubes and clog gas mask filters, feeding upon the moisture of their host and growing at a rapid rate. Toxicrenes are typically sent forth by a Hive Fleet after the initial swarms of gaunts and other basic warrior-forms have forced the prey world to expend the majority of its firepower. Accompanied by broods of Venomthropes, they begin the process of seeding the planet’s atmosphere with spore clouds, altering its environment and ecosystems to ensure efficient breakdown of biomass.[2]

Hive Fleet Gorgon in particular is notable for its extensive use of Toxicrenes in the opening stages of battle, relying on the dense clouds pumped out by the creatures to mask its advancing swarms and wear down enemy defenders.[2] 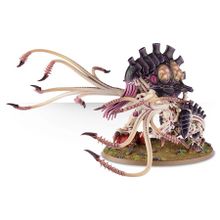