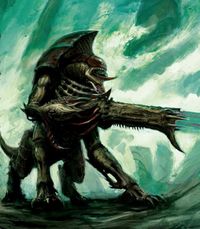 A Hive Guard with Impaler Cannon[3]

A Hive Guard is a Tyranid species that defends the consumption structures of the Hive Mind, such as Spore Chimneys and Capillary Towers set up during the later stages of a Tyranid planet invasion that have few built-in self-defenses.

A Hive Guard is essentially a gun-beast, providing a durable, stable, and movable firing platform for the massive Impaler Cannon bonded to its forelimbs.[1]

Hive Guards are mildly telepathic, allowing them to "see" through the eyes of all other Tyranid organisms, effectively allowing them to shoot at a target without seeing it, by utilising an unconscious wealth of incoming tactical and targeting information. In addition they can also command, through a complicated series of mental stimuli, the shard-beasts bonded with the ammunition they fire, to change vector whilst in flight to successfully home in on targets.[1]

Their long Impaler Cannons fire bony spines, as long as a man is tall, at velocities high enough to rupture plasteel or battle tanks. At the base of each spine is a small shard-beast Tyranid creature, a parasite that feeds off the blood vessels of the spine. As the spine is fired, the shard-beast's own innards are torn from its body and it only has a few moments of life left to use its thin membranous fins to steer the spine towards its prey.[1] Some Hive Guards are known to grow a Shockcannon in the place of an Impaler Cannon.[2]

Hive Guards are exclusively territorial and have limited mental capacity, content to stay perfectly motionless and defend a structure. Though under the Hive Mind's influence, they can be driven away from their charges to the front lines, for example when a heavily mechanised foe needs to be dealt with. They have incredibly short incubation cycles and can be maintained as end-stage larvae almost indefinitely, meaning biomass does not have to be wasted on maintaining idle Hive Guard defenders but they instead can be quickly spawned when the Hive Mind's rear is under attack.[1]