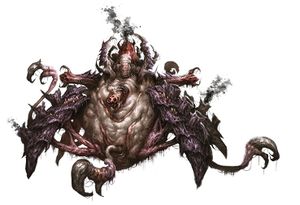 Sporocysts are Tyranid organisms designed to facilitate planetary consumption. Launched from orbiting Bio-Ships, when a Sporocyst makes planetfall it will burrow into the surface like a tick. Once embedded, the creature emits clouds of polluting microorganisms which alter the planets atmosphere until the air itself is ripe for consumption.[1]

Sporocysts are a vital element in a Tyranid Hive Fleet predatory cycle. These bloated, fleshy pods are released by bio-ships in low orbit. They float through a prey world’s atmosphere until they make landfall, before spreading the segments of their shell for protection and burrowing into the earth. Once they are securely buried, with only the spore chimneys atop their structure showing, they begin to pump out billions of polluting microorganisms – these begin the process of violently altering the planet’s atmosphere and ecology to better suit the Tyranids’ needs.[2]

When threatened, Sporocysts will squeeze out the flaccid spore-forms they carry. These simple bioforms quickly expand to become clusters of Spore Mines or larger, deadlier Mucolid Spores, before seeking out the nearest threat and detonating with catastrophic force. The Hive Mind occasionally deploys this ability for a more active purpose; there are records of hundreds of Sporocysts creating vast fields of Spore Mines to halt the advance of armour and infantry, delaying reinforcements long enough for the Tyranids to pick apart the piecemeal forces of their prey.[2]

It is thought that Sporocysts act as psychic resonators, boosting the abilities of synapse creatures nearby. As well as rapidly advancing the deterioration of the local biosphere, the sheer number of Sporocysts scattered across a planet’s surface may provide a series of synaptic staging posts: hotspots where Tyranid leader-beasts can better direct the flow of the invasion.[2]