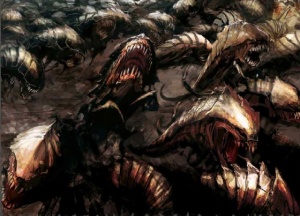 Rippers are small, maggot-like species of Tyranids which serve as the primary means of devouring bio-mass and the genetic imprint of a planet.[3]

They are the most numerous of Tyranid creatures, and in great swarms they can pull down and consume creatures many times their own size. However they are completely mindless and will perish if they lose a synaptic link with the Hive Mind.[1]

During the final stages of a planetary invasion, they scour the entirety of a planet ingesting all biological material on the planet and leaving only an empty and desolate wasteland. Eventually, the Rippers will become bloated full of biomass, unfit for combat. At this point, they simply crawl into Reclamation Pools where they and the bio-mass they've fed upon are broken down and absorbed by the Hive Fleet.[1] However, in some cases they might be evolved to perform higher functions depending on the genetic material they have absorbed.[3]

In certain instances, hive ships have been driven away from a world, leaving Tyranid ground forces isolated. Rippers appear to respond to such circumstances by burrowing below ground and metamorphosing into higher life forms. This has led many among the Magos Biologis to believe that Rippers are an immature form of the prime Tyrancii genus. This would mean they are theoretically capable of gestating into any kind of Tyranid creature with the right impetus from the Hive Mind, from Hive Tyrants to Hormagaunts. The wonder that Tyranids routinely produce and sacrifice their young so prodigiously serves only to reinforce how inhuman they truly are[3].

Sky-slashers are Rippers adapted with wings to allow flight.[1]

Eel-like Rippers are a unnamed variant of rippers designed to devour every lifeform in the planet's seas.[2]