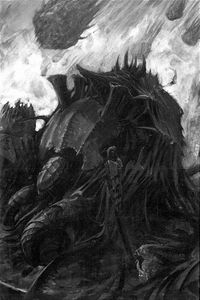 Mycetic Spores are large, living shells used to transport Tyranid creatures from Tyranid Hive Ships to a planet's surface. They could be considered the Tyranid equivalent of an Imperial Drop Pod.[1]

Mycetic spores are designed to survive the stresses of orbital insertion and to protect their cargo from impact with the planet's surface. Once through the upper atmosphere, the spores alter their shape to slow descent. The spores themselves perish soon after impact, having safely released a brood of Tyranid creatures, most commonly Hormagaunts or Genestealers [3] but a spore can contain anything from small Rippers to a hulking Carnifex.

In the initial stages of a Tyranid planetary assault, waves containing thousands of mycetic spores are launched into the planet's atmosphere by orbiting Hive Ships. They are also used to reinforce key areas of the battlefield, or to protect creatures from incoming fire until they reach point-blank range with the enemy.[3] Larger organisms are transported at a later stage of the invasion when the ships have entered a low orbit and are mopping up any resistance. Mycetic spores are also used as boarding vessels as well.[2]

Mycetic spores possess only a rudimentary intelligence and will simply lash out at everything nearby. They are armed with Ripper Tentacles, thick ropes of tendon and muscle that can smash, crush, or ensnare and drag in enemies. They also have fanged maws, and often a powerful ranged bio-weapon.[3]

The Tyranid Hive Mind is becoming more adept at its use of mycetic spores as the Tyranids push deeper into the Galaxy. Recent strains of mycetic spores have evolved sensory nodes, shielded with ablative chitin that burns off during orbital insertion, to allow the spore to make a more accurate landing by homing in on pheromone trails released by Lictors. Other strains of mycetic spores are actually two bioforms fused together: when a spore of this type makes impact with the planet's surface, its outer shell dies away and peels apart to reveal another symbiotic organism inside that takes sustenance from the outer shell to fuel a powerful bio-weapon.[3]